wall clutter, an easy to use interface, and communication between subsystems for automation features, added convenience, and potential energy savings. 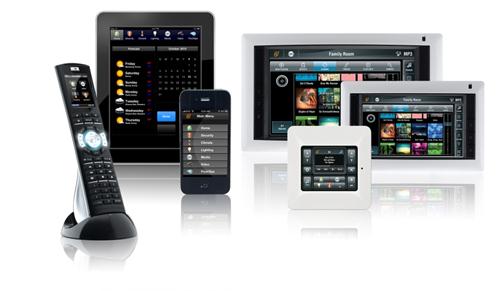 You may interact with a home automation system by any one of or a combination of the following: 1 – in-wall keypads, 2 – handheld remote controls, 3 – portable color touch panels, smartphones, iPads/tablets,

An iPhone, iPod Touch, iPad/tablet or Android smartphone may also be used as an auxiliary control. A popular option is to have the ability to control your home from computers both inside and outside your home. You can control your home from any Internet connected computer, even while on vacation. “Outside the home” control also extends to smart phones and tablets.

One of the advantages of in-wall touch panels is that they combine the features of other items that normally reside on your walls (security keypads, thermostats, music system keypads/volume controls, and even lighting keypads), greatly minimizing wall clutter. The unified user interface is also easier to use. Having in-wall touch panels in at least the key areas of the home also mean you will have control where you need it; relying only on wireless touch panels and remote controls can mean not having control if someone takes it to another room. Lastly, a wired connection to the control system’s “brain” is always more reliable than a wireless connection.

Nearly every home automation manufacturer makes control “apps” for the iPad and similar devices, but our recommendation is to use these to augment, not replace, dedicated home automation controllers.

Before you decide which home automation / control system is best for you, be sure you receive a demonstration of a functioning system and try it out yourself. Is it intuitive? Could your parents and friends operate it without any instructions? Not all control systems are created equal; many product offerings force you into using pre-defined user interfaces and button layouts. Maybe this was intuitive to the engineering team that designed it, but is it intuitive to you?

Does the control system allow a custom user interface? This topic is related to “Ease of Use” discussed above. Many home control systems use preset control screens that cannot be changed by the installer. With such “closed” systems, you may be stuck with something that is overly complicated. Most people want the minimum amount of button presses to make something happen (such as watch TV, adjust temperature, arm the security system, listen to music, etc.) and eliminate rarely used buttons on their remote controls. Be sure the control system you choose meets your desire for something easy to use and easy on the eyes.

More advanced control systems allow greater flexibility in button layouts, colors, and custom presets. These custom –labeled presets can automate such tasks as turning on a house-wide lighting scene or pressing a preset to turn on your favorite music in several rooms at once…great for saving time and making life more convenient.

4. What is the home automation manufacturer’s main business model?

5. Is the control system “closed” or open-ended?

Is the control system able to incorporate popular and well-established subsystems, such as popular lighting control systems, thermostats, security systems, cameras, etc., or are you are forced into purchasing these other items from the home automation manufacturer that is making the control system?

This is related to point #3 above; most people and general contractors are most comfortable selecting well known and proven reliable alarm systems, thermostats, and lighting control systems that have an established track record of reliability and industry-wide acceptance. Some control system manufacturers will only work with their own brand of controls or perhaps only a very limited selection of other brands. Make sure the control system you select works with brands that your architect and general contractor are comfortable selecting.

If you don’t, you may run into problems with HVAC contractors, security contractors, and any other tradesmen who are responsible for maintaining the controlled subsystems in your home shifting all blame back to the home automation installation company.

6. You need an enterprise-grade computer/IT network

We are sure you appreciate how the Internet has changed your life and has become vital to communication and entertainment. More and more items in your home are connecting to the Internet and to each other, so a robust computer network is more vital than ever.

Home automation control systems communicate through your computer network, so the quality of the components used and how they are set up are vital to performance and reliability. Most handheld remote controls and touchscreens communicate with the control system brain through a WiFi connection, so WiFi signal strength and range are vital. For the ultimate in reliability, only enterprise-grade networking components should be used. These professional level network components give you the highest reliability and security and need to be configured by an experienced IT professional. Be sure your control system installer specifies an enterprise-grade network system, and preferably, they will also be the ones installing and configuring it.

7. Who will program your home automation control system?

Will your control system be programmed by the installation company that sold it to you, or will it be outsourced to a 3rd party? Be sure you know the difference between the two, especially when it comes to service calls and who ultimately takes responsibility for the control system’s performance. Questions to ask are:

• How fast will the programmer be able to respond to your service request?

• What are their service call lead times?

• Do they have 24 hour emergency response service?

• Do they have an official service department, or do their installation techs handle service calls at the end of the day or on weekends only?

In conclusion, choose your home automation control system and installation company like you would when purchasing a new automobile. When choosing a new car, you read reviews of the car and perhaps seek out what industry magazines (Car & Driver, Automobile, etc.) say about the brand, then you test drive it for yourself to make sure it fits your needs and desires. The reputation of the particular auto dealership is important, too, as this will be where you have your car serviced. If you do the same homework when selecting your new home automation system and audio video installation company, you have a strong likelihood that you will find it to be one of the favorite aspects of your home.